One of the most unique programs Colēgiate Preparatory Academy offers its students is a two-week study abroad program in beautiful Verona Italy. This program is offered to students in grades 10-12 with the opportunity to meet and collaborate with Italian students who are working towards their American High School Diplomas. Students will have the opportunity to stay in a 12th century monastery once inhabited by priests and Napoleon Bonaparte himself. Students will receive tours of the city while learning about life in northern Italy. This unique experience is offered to Colēgiate Preparatory Academy students as part of their academic program. More information will be given to qualified students as we get closer to departure. 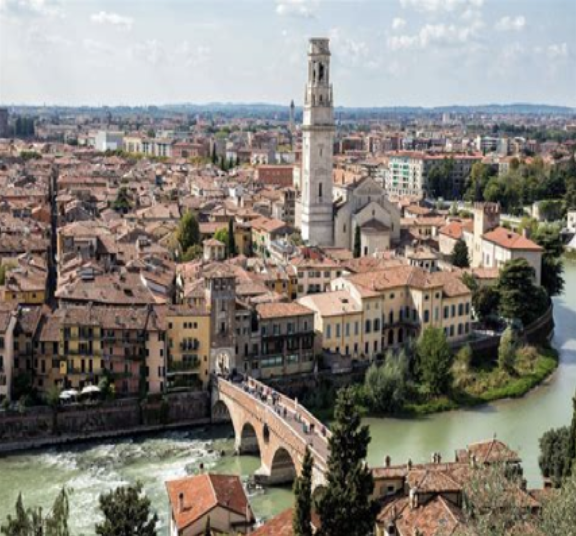 About Verona Italy
Verona is a city on the Adige River in Veneto, Italy, with 259,610 inhabitants. It is one of the seven provincial capitals of the region. It is the largest city municipality in the region and the second largest in northeast Italy. The metropolitan area of Verona covers an area of 1,426 km (550.58 sq mi) and has a population of 714,310 inhabitants. It is one of the main tourist destinations in northern Italy because of its artistic heritage and several annual fairs, shows, and operas, such as the lyrical season in the Arena, an ancient Roman amphitheater. Between the 13th and 14th century the city was ruled by the Della Scala Family. Under the rule of the family, in particular of Cangrande I della Scala, the city experienced great prosperity, becoming rich and powerful and being surrounded by new walls. The Della Scala era is survived in numerous monuments around Verona. Two of William Shakespeare's plays are set in Verona: Romeo and Juliet (which also features’ Romeo’s sojourn to Mantua) and The Two Gentlemen of Verona. It is unknown if Shakespeare ever visited Verona or Italy, but his plays have lured many visitors to Verona and surrounding cities. Verona was also the birthplace of Isotta Nogarola, who is said to be the first major female humanist and one of the most important humanists of the Renaissance.